Khiva is a city of approximately 100,000 people located in Xorazm Region, Uzbekistan. According to archaeological data, the city was established around 1500 years ago. It is the former capital of Khwarezmia and the Khanate of Khiva. 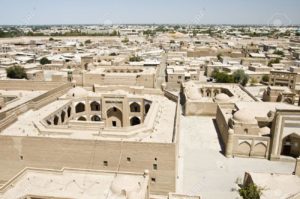 panoramic view of khiva from the minaret of-juma mosque

Khiva is split into two parts. The outer town, called Dichan Kala, was formerly protected by a wall with 11 gates. The inner town, or Itchan Kala, is encircled by brick walls, whose foundations are believed to have been laid in the 10th century. Present-day crenellated walls date back to the late 17th century and attain the height of 10 meters.

Kalta Minor, the large blue tower in the central city square, was supposed to be a minaret, but the Khan died and the succeeding Khan did not complete it.

The old town retains more than 50 historic monuments and 250 years old houses, mostly dating from the 18th or the 19th centuries. Djuma Mosque, for instance, was established in the 10th century and rebuilt in 1788–89, although its celebrated hypostyle hall still retains 112 columns taken from ancient structures.