GENEARAL INFORMATIN ABOUT THE CITY

Tashkent  or Toshkent is the capital and largest city of Uzbekistan, as well as the most populated city in ex-Soviet Central Asia with a population in 2018 of 2,485,900. It is located in the north-east of the country close to the border with Kazakhstan.

Before Islam influence started in the 8th century AD, Tashkent was influenced by the Sogdian and Turkic cultures in its early history. After its destruction by Genghis Khan in 1219, the city was rebuilt and profited from the Silk Road. From 18th to 19th century, the city became an independent city-state, before being re-conquered by the Khanate of Kokand. In 1865, it fell to the Russian Empire, and became the capital of Russian Turkestan. In Soviet times, Tashkent witnessed major growth and demographic changes due to forced deportations from throughout the Soviet Union. Much of the city was destroyed in the 1966 Tashkent earthquake, though it was rebuilt afterwards as a model Soviet city. It was the fourth-largest city of the Soviet Union at the time, after Moscow, Leningrad and Kiev.

Today, as the capital of an independent Uzbekistan, Tashkent retains a multi-ethnic population, with ethnic Uzbeks as the majority. In 2009, the city celebrated its 2,200 years of written history.

Due to the destruction of most of the ancient city during the 1917 revolution and, later, the 1966 earthquake, little remains of Tashkent’s traditional architectural heritage. Tashkent is, however, rich in museums and Soviet-era monuments. They include: 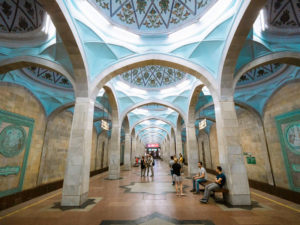