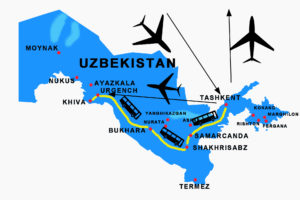 Breakfast. “Check out” hotel. Transfer to the north-east part of Tashkent, that’s ancient part called as ‘old city’. Excursion in the city visiting: ‘Khasti-Imom’ complex: madrassa, mosque, mausoleum & museum of the Holy Koran. Mausoleum of Kaffol Shoshiy (903-976), he was very famous and holy scientist in Tashkent in his time. He named ‘Khasti Imom’ by people. Madrassa of Barakkhan (XVI cen.), was one of the most popular Koranik school, today is center of craftmen. Museum of Moyi Mubarek is very interesting sacred place, where Holy Koran – Osman’s Koran (VII cen.) & ancient manuscripts (XIII-XX cen.) are kept. Mosque Tilla Sheikh (1890 y.) is functioning mosque, where Muslims pray five times a day. Friday Mosque of Khazrati Imom (was built in XIX century & named as Namozgokh Friday Mosque) is biggest mosque, which is rebuilt in 2007. Every Friday this place is filled with Muslims. Transfer to Bazar Chorsu, most beautiful market in Tashkent and is full of people every day. Excursion in Friday Mosque Khodja Akhror Vali (XV cen.), which was built in 1451, centuries ago was very famous; beginning of the XX century mosque was closed. Now it is open for Muslims after restorations. Madrassa Kukaldosh (XVI cen.) was built in 1561. It is operational Madrassa in Tashkent only for boys (not girls) as Muslims high school & 400 students are taught there. Transfer to Museum of Applied Arts, which was built (the end of the XIX century) by Russian ambassador Plovsev, who used it as his residence. It exists as museum since 1937. Transfer to airport & departure for Urgench with local flight HY-1057 (18:40 – 20:20). Arrival in Urgench & transfer to Khiva (35 km).

After breakfast in the hotel we start full day city tour of Khiva – one of the most fascinating cities in the region.  A traditional story attributes the name to one of the sons of Noah: “It is said that Shem, after the flood, he found himself wandering in the desert alone.  Ichan-Kala (an internal town of Khiva City) even today. There are 4 gates and walls with length 2500 meters. Madrassa Mukhammad Amin Khan (XIX century) was the biggest madrassah, there were 125 rooms for 250 students. Minaret – Kalta Minor (XIX cen.) is very interesting historical monument, it had to be highest, but the owner of minaret died when it was 28 meters. Konya Ark was the residence of governors between XVII and XIX century. Madrassah Mukhammad Rakhim Khan II was built in 1871, was closed in the beginning of the XX century. The Mausoleum of Pakhlavan Makhmud (XIX cen.), is the most sacred mausoleum of Khiva. In 1913 there was built a new complex. Madrassah Shergazi Khan (XVIII cen.) Madrassah, Minaret & First Russian School were built by Islam Khodja (was Prime Minister) in 1910, when he was Prime Minister of Khiva. From that time till today Islam Khodja’s Minaret is the highest minaret of Uzbekistan (57 meters). Nowadays his Madrassah is Museum of Applied Arts & his Russian School is museum of old photos. The large Friday Mosque is famous for its 218 wooden columns supporting its roof – a concept thought to be derived from ancient Arabian mosques. Inside it, you can climb over the very dark stairway up to the pigeon-poop-splattered gallery of the 47m Friday Minaret. There are also museum of music, museum of nature, museum of art & center of silk. All museums & centers are located in the Madrassah of nineteenth century. Close the door of the citadel there are white mosque and turkish bath, which were built by Anush Khan in the XVII century. Our visit in Khiva ends with complex of ‘Tash Hovli’ (Stone Home). Palace Tash Hovli served as the summer residence of Khan Allakuli and it was completely built by the end of the XIX century. Dinner at local restaurant & overnight in the hotel.

Breakfast. Transfer to Bukhara (480 km). Our route goes crossing the Amu-Darya River and the Red Desert (Kyzilkum). In Uzbekistan there are two great rivers: the Amu-Darya (in classical Greek known as the Oxus) and the Syr-Darya (known as Jaxartes or Yaxartes by the Greeks). Amu Darya flows through Turkmenistan from south to north, passing Turkmenabad and marking the border between Turkmenistan and Uzbekistan from Khalkabad. The Kyzylkum Desert, it is the 16th largest desert in the world. It covers about 298,000 km2. Bukhara – is the city, which is important for country’s economy with its mineral deposits, particularly gold, uranium, aluminum, copper, silver, oil and natural gas. Located on the Silk Road, the city has long been a center of trade, scholarship, culture, and religion. During the golden age of the Samanids in the 9th and 10th centuries, Bukhara became the intellectual center of the Islamic world and therefore, at that time, of the world itself. UNESCO has listed the historic center of Bukhara, which contains numerous mosques and madrassahs, as one of the World Heritage Sites. Arrival in Bukhara and hotel accommodation. Free time. Dinner at local restaurant & overnight in the hotel.

Breakfast. Excursion in the historic center of Bukhara – functioned as one of the main centers of Persian civilization since its early days in the VI century BC – Turkish speakers gradually moved in from the VI century AD. The city’s architectural and archaeological sites form one of the pillars of Central Asian history and art. The region of Bukhara long formed a part of the Persian Empire. The mausoleum of Samanids is located in the historical urban nucleus of the city of Bukhara, in a park laid out on the site of an ancient cemetery. This mausoleum, which is one of the most esteemed sights of Central Asian architecture, was built in the IX (X) century (between 892 and 943) as the resting-place of Ismail Samani. Although in the first instance the Samanids were Governors of Khorasan and Transoxiana under the suzerainty of the Abbasid Caliphate, the dinasty soon established virtual independence from Bagdad. Mausoleum of Chashma-i Ayub. The current building was constructed during the reign of Timur and features a Khwarazm-style conical dome uncommon in Bukhara. The Mosque of  Bolo Khauz. The Ark of Bukhara is a massive fortress located in the city of Bukhara. The Grand Minaret Minora-i Kalon is the only one of the structures of Arslan-han complex that was kept safe during that siege. It is also known as the Tower of Death because for centuries criminals were executed by being thrown from the top. The Grand Mosque (Masjid-i Kalon) was completed in 1514. Taqi Sarrafon – bazar of the moneychangers, Taqi-Telpak Furushon – bazar of the cap makers, Taqi-Zaragon – bazar of the jewelers. Ulugbek’s Madrassa is one of Central Asia’s architectural highlights, built by Ulugbek in 1417, sober and strictly proportioned. Abdulaziz Khan’s Madrassah is located opposite Ulugbek’s Madrassah. . The Lab-i Hauz Ensemble (1568–1622) is the name of the area surrounding one of the few remaining hauz (ponds) in the city of Bukhara.  The Ensemble, surronding consists of the Kukeldash Madrassa (1568–1569), the largest in the city, and of two religious edifices built by Nadir Divan-Beghi. There is also an interesting metal sculpture of Khodja Nasriddin.Dinner at local restaurant & overnight in the hotel.

Breakfast, transfer to Shakhrisabz (270 km). It means city of green or verdant city. Excursion in The Palace Ak-Saray, which was Timur’s Summer Palace (“White Palace”). It was planned as the most grandiose of all Timur’s constructions.  The Mosque of Kok Gumbaz / Dorut Tilovat Complex. The Friday Mosque was built in 1437 by Ulugbek in honor of his father Shahrukh, its name means “Blue Dome”. Located immediately behind the Mosque is the so-called “House of Meditation”, a mausoleum built by Ulugbek in 1438, but apparently never used for burials. Hazrat-i Imam Complex. On the Eastern part of the Mosque located another complex called Dorus-Saodat (Seat of Power and Might), which contains the Tomb of Jehangir, . However, the conqueror was buried in Samarkand, not in Shahrisabz. Transfer to Samarkand (140 km). Dinner at local restaurant & overnight in the hotel.

Breakfast. Excursion to the heart of Uzbekistan – Samarkand. The city was taken by Alexander the Great in 329 BC, when it was known by its Greek name of Marakanda. The city was ruled by a succession of Iranian, Persian, and Turkish peoples until the Mongols under Genghis Khan conquered Samarkand in 1220. In 2001, UNESCO added the city to its World Heritage List as Samarkand – Crossroads of Cultures

The Mausoleum of Gur Amir is Persian for “Tomb of the King”. This architectural complex with its azure dome contains the tombs of Tamerlane, his sons Shakhrukh, Miranshakh and grandsons Ulugbek, Sultan Muhammad. Also honored with a place in the tomb is Timur’s teacher Sayyid Baraka. . The Registan Square was the heart of the ancient city of Samarkand of the Timurid’s dinasty. The name Registan means “Sandy place” or “desert” in Persian. There three madrassas of the Registan are: The Ulugbek Madrassah (1417–1420), The Tilla-Kori Madrassah (1646–1660) and The Sher-Dor Madrassah (1619–1636). The Ulugbek Madrassa was  built during the Timurid’s Empire, has an imposing aiwan with a lancet-arch pishtaq or portal facing the square. The Sher-Dor Madrassah was built in the XVII century by Yalangtush Bahodir (was the ruler of Samarkand), he ordered the construction of the Sher-Dor and Tilla-Kori‎ madrassahs.  The Tilla-Kori Madrassah (means ‘gilded’) was built 10 years later. It was not only a residential college for students, but also played the role of grand mosque. The Mosque Bibi Khanum is one of the most important monuments of Samarkand. In the XV century it was one of the largest and most magnificent mosques in the Islamic world. The Mausoleum of Shah-i-Zinda (‎‎means “The Living King”) is a necropolis in the north-eastern part of Samarkand. The Shah-i-Zinda Ensemble includes mausoleums and other ritual buildings of IX-XIV and XIX centuries. The Shah-i-Zinda is connected with the legend that Kusam ibn Abbas, the cousin of the prophet Muhammad was buried there.

Dinner at local restaurant & overnight in the hotel.

Breakfast, free time till 12.00. ‘Check out’ from the hotel. Excursion in Museum Afrosiyob. It was an ancient site of northern Samarkand, that was occupied from c 500 BC to 1220 AD. Today, it is a hilly grass mound located near the Bibi Khanaum Mosque. Afrasiyab is the oldest part and the ruined site of the ancient and medieval city of Samarkand. It was located on high ground for defensive reasons, south of a river valley and north of a large fertile area which has now became part of the city of Samarkand. The habitation of the territories of Afrasiyab began in the VII-VI centuries BC, as the centre of the Sogdian culture. The Tomb of Daniel is the traditional burial place of the biblical prophet Daniel Various locations have been named for the site, but the tomb in Susa, Iran, is the most widely accepted, it being first mentioned by Benjamin of Tudela, who visited Asia between 1160 and 1163. Transfer to Tashkent. Dinner at local restaurant & overnight in the hotel.

Early morning, transfer from hotel to airport & departure to home