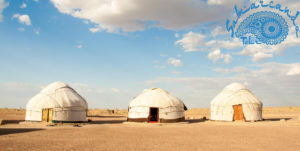 Yurta Tour on the Desert

The first people inhabited in the Central Asian region of modern-day Uzbekistan were Iranian nomads, who arrived from the northern grasslands of what is now Kazakhstan sometime in the 1st millennium BC. These nomads, who spoke in Iranian dialects, settled in Central Asia and began to build an extensive irrigation system along the rivers of the region. At this time, cities such as Bukhara, Samarkand and Tashkent began to appear as centers of emerging government and high culture.

Uzbekistan has an area of 447,400 square kilometers. It is the 56th largest country in the world by area and the 42nd by population. Uzbekistan is divided into twelve provinces, one autonomous republic Karakalpakistan and one independent city Tashkent.

Breakfast. “Check out” hotel. Transfer to the north-east part of Tashkent, that’s ancient part called as ‘old city’. It looks like a maze of narrow dusty streets overlooked by low houses from brick and mud. Excursion in the city visiting: ‘Khasti-Imom’ complex: madrassa, mosque, mausoleum & museum of the Holy Koran. Mausoleum of Kaffol Shoshiy (903-976), he was very famous and holy scientist in Tashkent in his time. He named ‘Khasti Imom’ by people. Madrassa of Barakkhan (XVI cen.), was one of the most popular Koranik school, today is center of craftmen. Museum of Moyi Mubarek is very interesting sacred place, where Holy Koran – Osman’s Koran (VII cen.) & ancient manuscripts (XIII-XX cen.) are kept. Mosque Tilla Sheikh (1890 y.) is functioning mosque, where Muslims pray five times a day.  Transfer to Museum of Applied Arts, which was built (the end of the XIX century) by Russian ambassador Plovsev, who used it as his residence. It exists as museum since 1937. Transfer to airport & departure for Urgench with local flight HY-1057 (18:40 – 20:20). Arrival in Urgench & transfer to Khiva (35 km). Dinner and overnight in the hotel.

After breakfast in the hotel we start full day city tour of Khiva – one of the most fascinating cities in the region. Its facilities are in Arabic style with color ranging from light blue to turquoise; there remained virtually intact since the sixteenth century.  The Mausoleum of Pakhlavan Makhmud (XIX cen.), is the most sacred mausoleum of Khiva. He was poet and sufi (1247-1325), on his tomb the mausoleum with dome (XIV century) was built, but later destroyed. In 1913 there was built a new complex. Madrassah Shergazi Khan (XVIII cen.) was very famous in the XIX century, was named as ‘home of scientists’. One of the great poets of his century – Turkmen Makhtumkuli studied here.Islam Khodja’s Minaret is the highest minaret of Uzbekistan (57 meters). All museums & centers are located in the Madrassah of nineteenth century. Close the door of the citadel there are white mosque and turkish bath, which were built by Anush Khan in the XVII century. Our visit in Khiva ends with complex of ‘Tash Hovli’ (Stone Home). Palace Tash Hovli served as the summer residence of Khan Allakuli and it was completely built by the end of the XIX century.

Breakfast. Transfer to Bukhara (480 km). Our route goes crossing the Amu-Darya River and the Red Desert (Kyzilkum). In Uzbekistan there are two great rivers: the Amu-Darya (in classical Greek known as the Oxus) and the Syr-Darya (known as Jaxartes or Yaxartes by the Greeks). Amu Darya flows through Turkmenistan from south to north, passing Turkmenabad and marking the border between Turkmenistan and Uzbekistan from Khalkabad. The Kyzylkum Desert, it is the 16th largest desert in the world. Its name means Red Sand in Turkish languages. It is located in Central Asia, in the territory between two rivers. Today it is divided between Kazakhstan, Uzbekistan and (partly) Turkmenistan. It covers about 298,000 km2. Bukhara – is the city, which is important for country’s economy with its mineral deposits, particularly gold, uranium, aluminum, copper, silver, oil and natural gas. The history of Bukhara stretches back for millennia. The origin of its inhabitants goes back to the period of Aryan immigration into the region. Located on the Silk Road, the city has long been a center of trade, scholarship, culture, and religion. Overnight in the hotel.

Breakfast. Excursion in the historic center of Bukhara – functioned as one of the main centers of Persian civilization since its early days in the VI century BC – Turkish speakers gradually moved in from the VI century AD. The city’s architectural and archaeological sites form one of the pillars of Central Asian history and art. The region of Bukhara long formed a part of the Persian Empire.  There is also an interesting metal sculpture of Khodja Nasriddin, the quick-witted and warm-hearted man, who forms the central character of many children’s folk stories in the Central Asian and Indian subcontinent, sitting atop his mule with one hand on his heart and the other with an ‘All OK’ sign above his head. Dinner at local restaurant & overnight in the hotel.

Breakfast. Sitorai Mokhi-Khosa (XIX century mid) – summer residence of Bukhara’s last emir. The Bukhara architects having trained in Russia managed to combine oriental and western styles in their creation. Mausoleum of Bakhoutdin Naqshbandi (XIV century) – is one of the most important Muslim shrines. The Mausoleum of Saint Bakhouddin Naqshbandi is considered as the Central Asian Mekka.  Believers from different muslim countries come here to ask for the fulfilment of wishes and healing. Chor Bakr Necropolis (XVI century) – is really an unusual and mysterious place. Visiting Chor-Bakr you could not help but feel the breath of the world of the dead, where in the quiet of the alleys the thoughts of the frailty of life and the transience of human life unwittingly come into your head.

Enjoy free time in the afternoon. Dinner at local restaurant & overnight in the hotel.

Breakfast. In the morning depart Bukhara and drive to yurt camp located in Kyzylkum desert (230 km). On the way stop in:

Gijduvan pottery masters workshop – Gijduvan museum of ceramics. Today Gizhduvan is home for the sixth generation of potters from Narzullayevs family which glorified Gijduvan school ceramics all over the world. Everyone who wants to have a look at Gijduvan pottery is welcomed to visit the Museum of Ceramics and even pick a souvenir at the potter’s shop.

Nurata town to visit a local mosque with a holy spring water. The small town Nurata is located in the foothills of Nuratau Mountains, stretching out hundreds kilometers from Jizzakh and Barren Steppe to Navoi and Kyzylkum desert. There are a lot of legends related with the origin of the city and its name. People refer the origin of the city to the fortress Nur, which was founded by Alexander the Great in 4th century BC.

In the afternoon continue driving to yurt camp in Kyzylkum desert. Stop on Nurata pass to see petroglyphs. Arrive in Safari Yurt Camp, accommodation in yurt. Camel riding and free time. In the evening dinner near the camp fire with Kazakh akin singing folk songs. Overnight in the yurt.

Breakfast. In the morning visit desert Aydarkul Lake. Free time on the lake.

Aydarkul Lake – miracle in the middle of the desert. Today the area of Aydarkul lake is 3000 square meters, the length – nearly 250 km and width – from 8 to 15 km. The area around the lake best suites for walks and rides on horse back and camelback. Fauna is very rich. In spring and in summer alpine grasslands abounds in variety of colors – bright-red tulips and snowy-white acacia. High up in the mountains black storks build its nests. This bird specie is listed in the Red Book of many countries. In early spring, when Arnasay is filled with water, thousands of ducks, geese, pelicans and herons flock together here. Tourists can fish, swim and get a tan here.

In the afternoon depart the yurt camp and drive to Samarkand (270 km). Arrival in Samarkand, check in to the hotel. Time for rest. Dinner at local restaurant & overnight in the hotel.

Breakfast. Excursion to the heart of Uzbekistan – Samarkand (“Stone Fort” or “Rock Town”) is one of the oldest inhabited cities in Central Asia, prospering from its location on the Silk Road between China and the Mediterranean. At times Samarkand has been one of the greatest cities of Central Asia. The Shah-i-Zinda Ensemble includes mausoleums and other ritual buildings of IX-XIV and XIX centuries. The Shah-i-Zinda is connected with the legend that Kusam ibn Abbas, the cousin of the prophet Muhammad was buried there. As if he came to Samarkand with the Arab invasion in the VII century to preach Islam.  Overnight in the hotel.

Breakfast, transfer to Shakhrisabz (140 km). It means city of green or verdant city. It is a city in southern Uzbekistan located in the southern part of Samarkand. It was a major city of Central Asia, it is primarily known today as the birthplace of 14th-century Turk-Mongol conqueror Timur. Shahrisabz was the birthplace of Timur on April 9, 1336, who was born in the family of a minor local chief, and during the early years of the Timurids’ Dinasty, enjoyed its considerable patronage. Timur regarded Shahrisabz as his “home town” and planned it eventually to be the location of his tomb. Several remaining impressive monuments from the Timurids’ Dinasty have enabled the old part of the city to be inscribed on the UNESCO World Heritage List. Excursion in The Palace Ak-Saray, which was Timur’s Summer Palace (“White Palace”). Hazrat-i Imam Complex. On the Eastern part of the Mosque located another complex called Dorus-Saodat (Seat of Power and Might), which contains the Tomb of Jehangir, Timur’s eldest and favorite son. The adjacent mosque is said to house the tomb of a revered VIII century imam Amir Kulal.Behind the Hazrat-i Imam Ensemble is situated tomb of Timur. It is a bunker with a door leading to an underground chamber, discovered by archaeologists in 1943. The room is nearly filled with a single stone casket, on which inscriptions indicate that it was intended for Timur. However, the conqueror was buried in Samarkand, not in Shahrisabz. Return to Samarkand (140 km). Dinner at local restaurant & overnight in the hotel.

Breakfast, free time till 12.00. ‘Check out’ from the hotel. Excursion in Museum Afrosiyob. It was an ancient site of northern Samarkand, that was occupied from c 500 BC to 1220 AD. Today, it is a hilly grass mound located near the Bibi Khanaum Mosque. Afrasiyab is the oldest part and the ruined site of the ancient and medieval city of Samarkand. It was located on high ground for defensive reasons, south of a river valley and north of a large fertile area which has now became part of the city of Samarkand. The habitation of the territories of Afrasiyab began in the VII-VI centuries BC, as the centre of the Sogdian culture. The Tomb of Daniel is the traditional burial place of the biblical prophet Daniel. Various locations have been named for the site, but the tomb in Susa, Iran, is the most widely accepted, it being first mentioned by Benjamin of Tudela, who visited Asia between 1160 and 1163. Transfer to Tashkent. Dinner at local restaurant & overnight in the hotel.

Early morning, transfer from hotel to airport & departure to home.